[Its Friday nite and I'm nursing a richolah so thought I'd do some editting on my MIR postings. I also reread Rubber Canuck's well-written blog on his experience as a contestant and remembered some things I had forgotten!]
--------------------------------------------------------
Sunday, the last day of MIR was spent having breakfast with the guys at annsathers (a tradition for mir), and then over to the kink mart for one last look at the vendors and "toy" area. I had wanted to spend some time in one of Kinkrubbers toys, the gimp sack, but was just to damn tired to enjoy it and was already getting the sore throat I'm still salving. My judging duties were over, however, and I enjoyed the entertainment nonetheless and said hello to many friends. rubberwilli found me and thanked me and gave me the small "gift pack" that eddie our host had put together for the judges. Its our little secret but I will say that the gifts will come in handy in our private "attic" space. [a prize package would have been cool too!]
[For more on the Judging Perspective, see my previous post from wednesday].
We went back to the hotel afterwards and after a group dinner at sushi next door (I was the only one still in rubber but that's me all over), many of us went over to Sidetracks for some classic video tunes and general merryment. I can't remember what I wore (my black uniform with white piping I think, a fabulous shirt from LaterWork in Peterborough) but it was full rubbery! Met lots of old friends and a few new ones! Got some groping in too. Okay, Monday was just plain tired but I got into my green rubber camo pants and shirt and headed over to the train station for the long ride home. The camo pants (Ill show some pics in a later blog) get some curious looks as the commoners try to figure out what it is I'm wearing. It was nice to let my thoughts drift into rubbery naughtiness for a cple of hours while the scenery rushed by. So now just like that I'm off again on travel for the next few weeks, and home is beginning to feel like a hotel. When is that next rubber weekend . . . ? 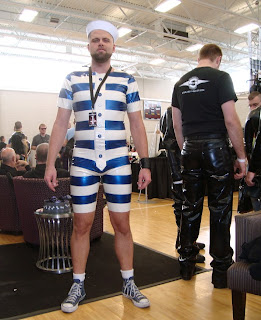 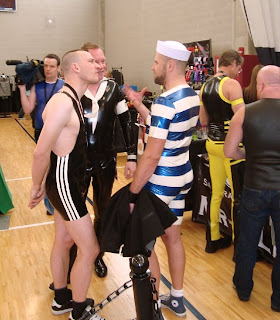 Rubber Canuck in his swimsuit 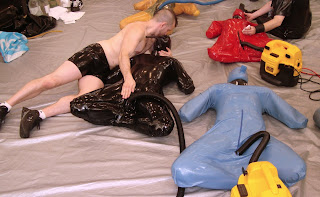 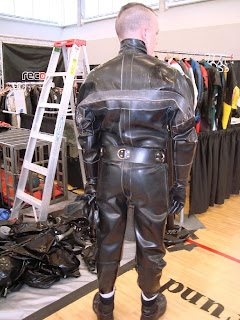 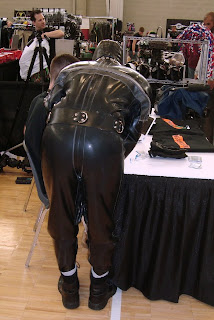 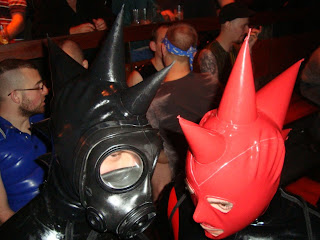 Aliens sighted at Sidetracks during the postMIR Sunday nite party 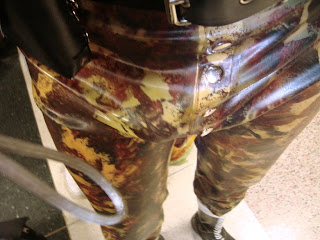 Waiting to board my train home monday afternoon in my camo rubber
No comments: Links to this post 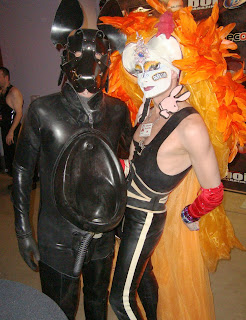 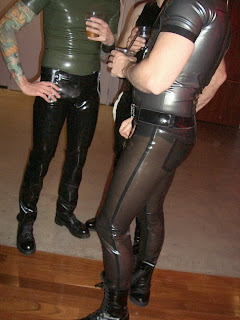 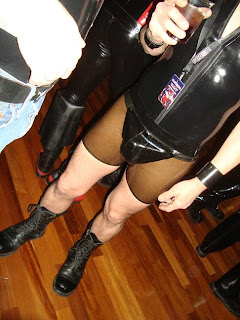 I have a thing for smoky transparent latex . . . 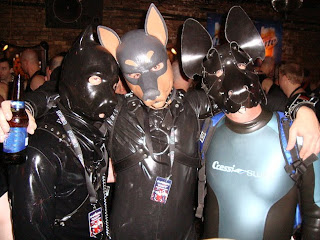 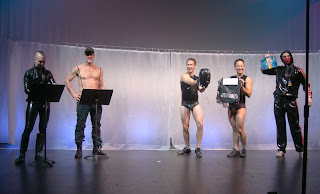 The Rubber Pryce is Right!
Another scene from Friday nite show, Part 1. 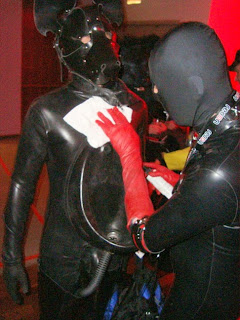 A clean urinal is a happy urinal, at least early in the evening . . . 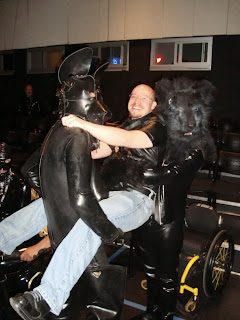 Horsing (or wolfing) around with a good friend, Int'l Mr. Leather 2010 Tyler McCormick.
No comments: Links to this post