Rubber gimp-dog / pup Ranger (he's not sure yet if he's a gimp-dog or pup or both) went out on a romp at the Mephit Fur Meet this past weekend.  He met some really cute pups, had his first inter-pup play mosh, had some frisky time with a fine young pup, and got some interesting ideas for next year's Gummbalaya (more on that later!).   Here are some photos.  Note that Ranger had a wardrobe malfunction and had to use his back-up pup-suit, a short-sleeve polo.  He had soooo much fun!  He can't wait for his next outing, a pool party!

FYI: the hood is by Digger.

Raed all about Ranger's awakening in our previous post . . . 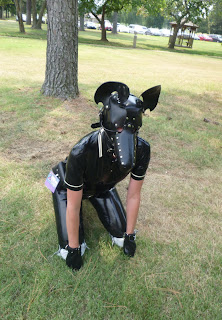 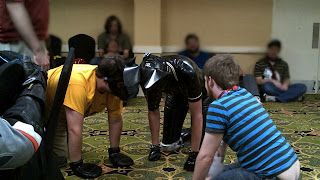 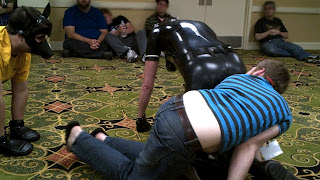 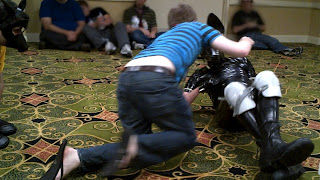 You may have noticed the change in title for this blog.  It merely reflects a "transformation" that has occurred in my rubber personality.  Perhaps it might be better to say "awakening."  I'm pleased to say that my life, in spite of certain strongly suppressed urges, has been a continuing series of ongoing awakenings and discoveries, starting with the slow drawn-out plunge into the rubber world over the past decades.  This blog site has shown some of those adventures, tho not the more risque ones (I don't want to be shut down and those photos can be found on my on-line profiles!).

The latest awakening is into the rubber pup world.  All those other rubber facets remain strong of course, and I will continue to travel in rubber.  In my travels, including attendance at the first ever International Puppy Contest in 2001 where we met an incredibly cut pup winner, I have always thought pups and especially rubber pups cute and adorable and I would watch with longing, not really understanding what that longing meant.  Still, I did not consider it my world to start barking and running around on all fours.  Little did I know!

This plunge into rubber pup-hood happened quickly over the course of a week or so.  It all began with the purchase of a rubber gimp suit some months ago (for those unfamiliar it is a rubber body bondage suit that encapsulates the head, legs and arms and allows the wearer to waddle around on all fours, namely the elbows and knees).  Not exactly free moving but mobile nonetheless, and an intense bondage experience for myself and my partner/master both.  As much as I liked the rubber hogsack, I felt the need to struggle a little more freely and this suit did wonders and ultimately unlocked something neither of us expected. 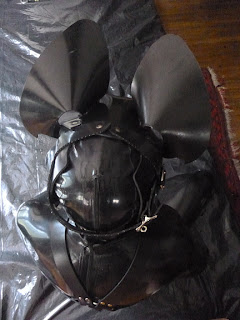 We recently attached a large rubberized puppy hood to it/me, and hang on, it was off to the races!  I started barking and grunting and, with some learning, waddling around in my restricted zone (the suit has no eye holes so I was given a very confined space to roam/struggle in).  My owner/husband would starting giving me commands/requests (after quickly determining that the gruff-style master did not work for us), and I would "walk" over and get up on my hind legs and pop my rubber pup head in his lap.  He would pet me, groom me (clean and polish my rubber coat), feed me water, and all that.  I would attempt to escape (oh, did I forget to mention the attached electrodes?), but being restricted in the suit and lacking vision, I had no escape.  I was loving it. 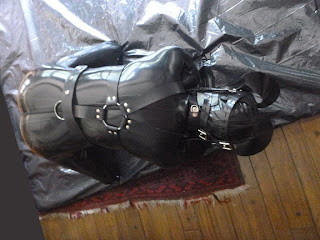 This was a new experience and completely fascinating.  I wanted more, and fast.  How deeply could I descend into this alternate world?  What would this feel like in rubber and pup-hood but unfettered by a restrictive (not that I'm complaining) gimp suit?  I would have to wait, however, as yet another week-long business trip out of town intervened.

When I returned home, I suited up in tight pants and long-sleeve shirt, toe socks and hood, all black, all rubber.  Sleek and shiny.  It wasn't the one piece rubber suit that would make for the proper pup suit as I don't have one in the closet at the moment but that will come soon enough.  On went the hood and the rubber mitts.  In moments I was on the floor on all fours.  Over the next hour we explored the rubber pup world, trying again some of the tricks we did in the gimp-suit and a few more, but this time with full mobility.  Rolling around, responding to commands and quearies, nuzzling, sitting, heeling, the whole smash.  No talking, all in dog code.  Only the knees betrayed me by wearing out, and I'm not so young any more, physically.  Soon I was flat on the floor, rubber paws in front, worn out and resting.

This was a real surprise for both of us.  Neither of us imagined that this would fall into place so naturally or quickly.  I had always thought that it was cute and fun to watch other rubber guys get into pup headspace but that I could not myself make that leap.  I could enjoy it in others but was just too rational for that sort of thing.  I could not have been more wrong.

Last Saturday we went to the leather bar and even tho it was a slow night, I went in and pupped out in the hood and was soon on my hind legs in the "sit" position waiting to see who would go by.  I was also hoping for some pup attention.  The in-bar leather store opened up and soon I was on all fours going in the door and sniffing around.  I barked and lifted my (rubber-mitted) paw to shake paws with the owner, whom we know well, and a few of the customers.  "What the f--- was I doing?  Never mind that, just enjoy!"

Although the rational self was often present as I became a rubber pup romping on the grounds, once the hood came down over my head and I was looking out the small eyes I truly felt like another creature.  The rational self simply observed and rarely interfered.  It helps to have an 'owner' who wants a pup and encourages the pup to be expressive.  He has been wonderful and supportive, and I have responded in kind, but few things have felt so utterly natural.  Now I have some new gear to get (yeah!) and we have some interesting things to explore. 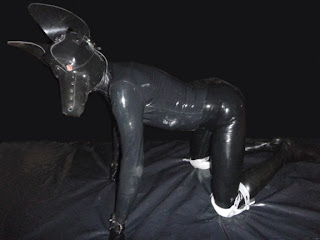 It was fairly evident from my long lean frame that grayhound was my breed and it fits the mask.  Though the ears are not breed-compatible, we've decided they work best on my long body type, and perhaps I am a hybrid breed.  We bandied about some names, including some from mutt to pretentious in style, before choosing "Ranger."

Being a Pup Out There

There is definitely a Pup Protocol that most folks on the outside are unaware of and this new world reminded me of in full measure as we ventured out.  Rubber pups should be treated like real pups, not as play toys or things to slap around, physically or metaphorically.  If in the presence of their owners, one should consult with that owner first before making physical contact.  I made that mistake once some years ago, but not since.

The night before going to the leather bar, we took the rubber pup (me) to the bar/dance-club and although one drunk fool tried to hump me and had to be pulled off, most were quite friendly and of course the cell cameras were whipped out all night long but in pup it didn't matter.  We will as always need to exercise some caution when going out, but are quite accustom to that.

Rubber pups who go out, especially in a venue other than a fetish convention, should have a handler/buddy/friend present as a guardian and should be aware of their surroundings when "in Pup".  It is best to be prudent.  If you keep to the right kind of place, most people will respond with amazement, delight, and playfulness.  What could be more fun?

Homage to a Boot

Yeah its been a long time!  As I compile some pic from summer travels, including a trip to London Fetish Party (damm, no photos allowed....), I will simply post some pics of a recent acquisition: Dr. Martens new rubber wellies, or classic lace-up boot in rubber, all rubber.  Unfortunately they do not as yet come in men's sizes, so instead of 10-11, I got 9-10, which pinch a bit in the toes but since when isn't high fashion worth a little pain and discomfort.  Since yellow is a favorite color of mine, I got them in that color.  These are the long boot.  Ill show some of the short shiny boot in a few weeks. 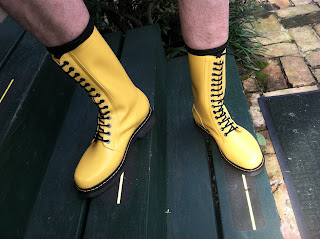 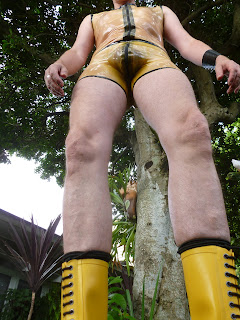 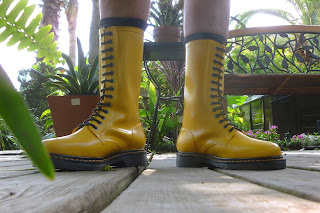 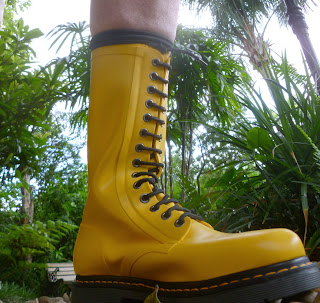 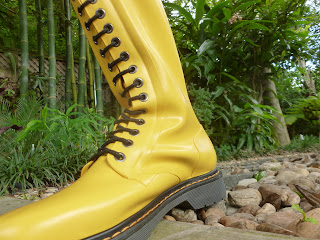 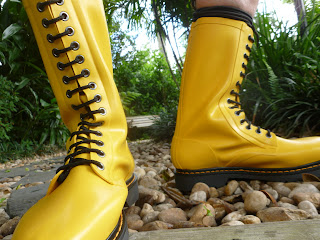 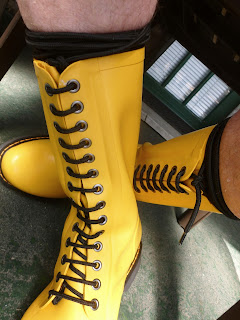 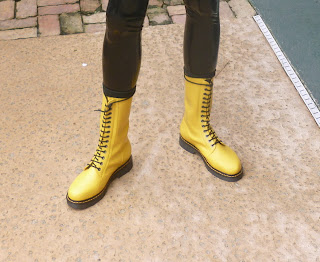 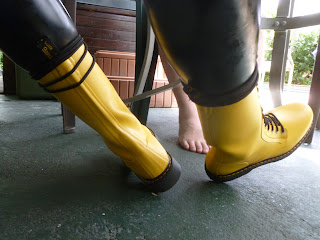 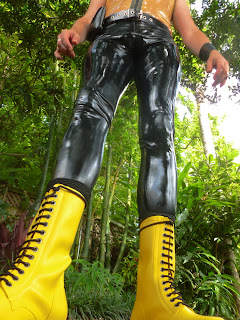