San Francisco, December 2010
After averaging 2 weeks on travel per month since August, I am finally on my way home, at least for a few hours before we drive off monday morning for a Christmas in the National Parks. I have some quiet time on the train heading back from SF after a week full of meetings, a concert and some museuming. I note I am on the Amtrak Surf-liner headed south, in full public rubber heard-to-toe and have been for 24 hours and will be for the next 2 weeks. My "kit" includes skin-tight black sailor front leggings with yellow stripe, yellow stripe fred perry shirt, black motor cycle jacket, and air force boots from the 1950s, all rubber of course. I'm also getting rock hard as I type this, but it is 7 am and maybe its just morning wood . . . I've also just gotten back from the men's room where I did some heavy re-polishing. Want to look good for the conductor. Since one of the kicks I get out of being a rubberman is being in rubber in public, I thought I'd share some of my adventures this past week.
I wore full rubber on the train to SF, a journey of 2 days. I was horny most of the way but didn't do anything about it. Sometimes I like that kind of denial aspect of being in full rubber and not being able to get off form hours on end. Besides I had two presentations to prepare so was on the computer most of the way. I didn't get much reaction except from 2 or 3 people who gave thumbs up and such. Most folks tried to pretend that they hadn't noticed but were clearly resisting the impulse to give me the full look over. Sometimes you catch people trying to take pictures on the sly, as if I wouldn't notice. Even when I had dinner in the dining car the couple sitting next to me didn't dare raise the subject although the guy across the aisle did ask what the suit was made of. 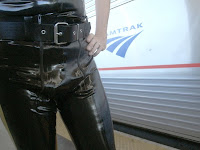 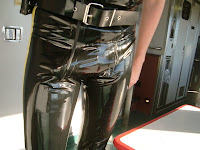 On Board in Rubber 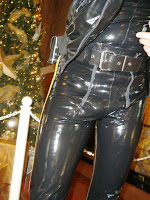 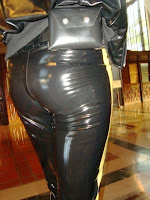 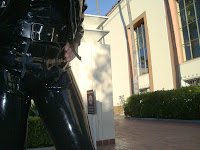 Union Station
I arrived in town a little tired (it was 10 p.m.) and got to my room and took a nice hot shower. It felt very stimulating to take the rubber off and reenergize the skin. The next morning I went to work and took care of my official business for the day and then headed over to Mr S for some shopping, trying on at least 6 different things. I put off a purchasing decision until my last day but ultimately did get a striped tank top and shorts and found a pair of smokey latex pants I want for Christmas!
The next day it was down to business. I had an early morning presentation and a concert later that night (the "Low" Christmas Concert) and decided to dress that morning in the full rubber that I would wear for the show before heading off for the day. I chose the same outfit I wore on the train because I packed light. (Sadly it was hidden under my business dress but it felt wonderful be in full gear again even as I stood up and gave my spiel secretly wearing a full rubber suit underneath.) Rain was threatening that morning so I also wore the black motorcycle jacket too. (Some of the staff took notice and were disappointed when I returned the next day not wearing it!) Once I was done with my duties I left the hall, stripped off my cotton as soon as it was practical and walked the streets in full rubber, enjoying the light rain, eventually heading back the mile and a half to my room to get ready for the show that night. I wished it had rained all week. The rubber really shines and people are even more receptive to a rubber man in a rain storm, as became clear as I walked around center city. 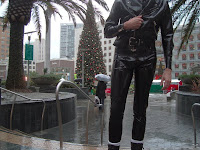 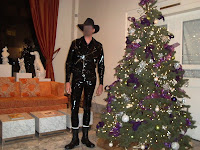 Holidays in the City, 2010
I love walking the streets of a large city in full rubber. Those few brave souls, most of them ordinary citizens, who toss out compliments are worth it all, and you know more than a few are envious they can't get away with it too. The first few days were warm enough that I was very comfortable but the last 2 days turned colder. I sallied forth despite the chill. I've been to MIR enough to know that full rubber in cold weather is difficult. It can feel like a thousand small needles being stuck into every inch of skin. As much as I dislike being cold, this feeling is exceptionally stimulating. If you've ever used the "pin wheel" during stimulation scenes, you have some idea of the feeling, except this is over every square inch! Of course, this is good only for short periods before your core temperature begins to drop dangerously.
Aside from my official obligations, the other objective of this trip was to visit the museums and photograph several unique collections of nude male sculpture for a book I'm working on publishing in the next moth or so. One of the best sculptures in the city is located on Market Street in the heart of the Financial District so go take a look next time you are there. It features 4 nearly naked men working strenuously on some sort of giant gear and lever system. Hot stuff. I saw it dressed in full rubber. Another is the italianate fountain in the center of Huntington Square featuring four naked guys holding up a large basin with turtles. It's strange but I feel like part of the sculpture dressed in tight rubber, the smooth shiny rubber reflecting on the polished brass or marble, as if I'm part of the sculpture that has come alive. Indeed I used such a fantasy when I entered MIR some years ago. Having some free time, I did a lot of posing with the sculptures. 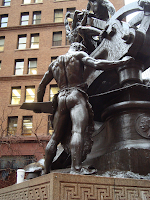 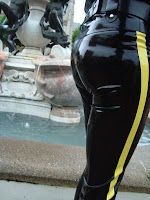 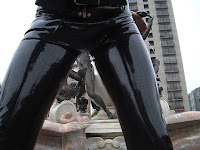 Fountain of the Tortoises, Huntington Park 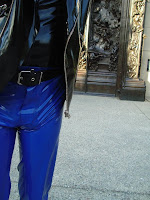 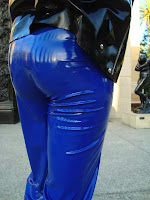 Gates of Hell
My 3-day bus pass gave me unlimited travel in the city so I rode the Cable Cars as frequently as possible. One of the lines was just 3 blocks from the hotel. I've always liked the unique charm of the victorian system, and riding them is full rubber was a blast! Riding the bus system in full gear provided no problems but was a bit more crowded. One dude on the bus who seemed to have smoked a few too many blurted out "That is one cool outfit!" Everyone smiled. 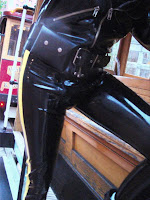 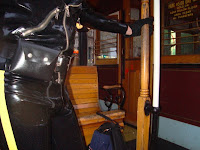 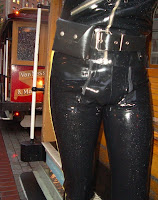 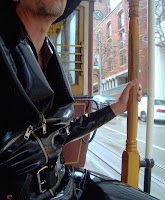 Cable Cars
My visit to the Rodin Sculpture Garden in Palo Alto was in blue latex pants and black polo/jacket. To the Legion of Honor art gallery I was back in black and yellow. The guards I think enjoyed it more than the guests. One followed me to ask what the suit was made of. It seems a rule that museum, restaurant or retail staff welcome something like a man dressed in full rubber to break the monotony of dealing with cranky and unruly people all day long. It also gives them something to talk about during break. They are almost always the most friendly or inquisitive when I go someplace in rubber. I usually get more admiring comments from staff than from the visitors to these establishments. There are enough smirks to go around but it's also true that quite a few folk are secret admirers and wish they could do the same. Others are put off guard but it is not my job to protect them from the unique things in life. Kids under 12 are by far the most carefree in their comments, sometimes to their adults temporary discomfort. It never fails to put a smile on my face, and sometimes even theirs as their kids try to figure out what this strange person is wearing!
My last night in town was in the same full rubber uniform gear that I wore up here and would wear on the way home. I met some of my friends at a fancy italian restaurant, most of whom are familiar with my habits. A couple of young ladies came up and had to touch the rubber, and I was happy to oblige. After that it was back on board for the 3 night trip back home, where I started typing this long report.
A side adventure took place when I hopped on the Gold Line to go to one of my favorite places for breakfast during a long layover in LA. I got on board with about 2 dozen other folks, one of them a gentleman in a beard who seemed to take some notice. I stood the whole ride because I hate smudging my rubber ass on the seats. Our eyes caught each other a few times and I smiled back once or twice. The stop before mine he got up and came over to me and gave me a strong set of quick compliments, handed my his card and signaled me to call him as he got off. Over my waffle, I called him and asked what was up. He liked my style and confidence, thought I looked hot and wanted me to attend an event he was planning. I'm not sure what the event is yet but I will be there if possible! 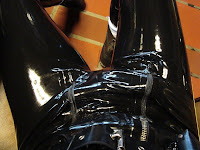 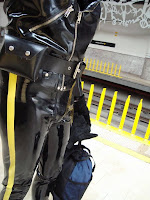 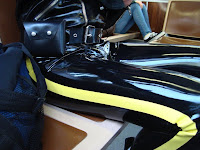 Trains Home
Right now I'm finishing this story as we head back home across the southwest for an early morning arrival. Several nice ladies sitting several rows behind were rather obviously curious about what I was wearing and trying to take pictures. I smiled and posed and had a nice chat. I've already called home and told them I am not allowed to be out of rubber until after our New Year's Eve rubber party. The scent inside of my rubber suit already reminds me of a sweaty locker room. Nice. I hope the next 2 weeks never end!
1 comment: