Returning from this trip last May began an exceptionally busy summer/autumn for work and travel and posting travelogs from it got pushed back and back . . .  But its time to post the tale of my rubber holiday in Europe last spring while I can still recall some of these great adventures from memory.

This trip was motivated by business and did not coincide with any of the large fetish events in northern Europe that occur during the year.  Mid-May proved to be very pleasant and I took some days off and hopped on trains to see some of my favorite statuary across the mid-continent.  One of the more intriguing aspects of rubber is how it can make a man look sculpted out of black granite, or an ancient athlete in bronze brought to life.  I took that to heart and wore some of my black skin-tight gear as I traveled.
First rubber stop was Munich, home of one of the best sculpture museums around. I wore my green rubber camo pants and black motorcycle jacket for this trip.  There I noticed someone hovering around behind me in the museum apparently taking my picture.  That happens all the time now, especially annoying people whipping their cells out to take photos without asking or (they think) with my noticing.  One of the drawbacks of the modern age.  Whether I or he asked first I don't recall, maybe it was him, but he informed me he was an art photographer and professor from Switzerland interested in what I was wearing, as art.  He wants to use the photos in his next book perhaps.  I hope he lets me know so I can see what he did with it.  In any case, the rest of the day was fairly uneventful.  The green and yellow rubber camo pants almost look like and can sometimes be mistaken for ordinary camo if one is not observant.  Maybe that helped me blend in a little but the shiny black motorcycle jacket stood out for sure.  I had a lot of fun posing for self portraits at the stations in that outfit! 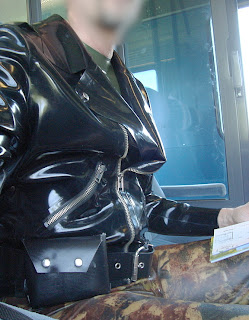 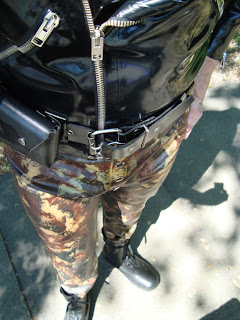 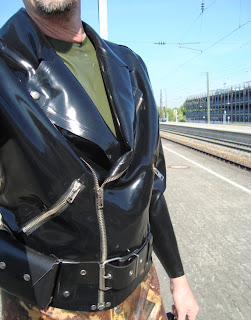 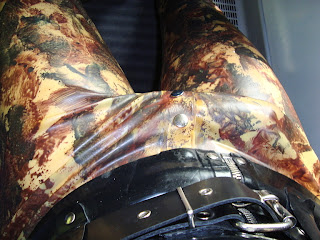 . . . training across Europe . . .
Zurich Daytrip
. . . my stop the next day to see one of the hottest male sculptures I know of, located in the heart of the city on the waterfront (see picture).  It is a handsome and graceful piece symbolizing male "fraternity."  It was a busy spot inside a very small park located on the lake front just a few km from the station.  I spent an hour or so photographing the piece, stopping only once to capture myself on film.  The walk back to the central station down the main boulevard felt conspicuous and I wished I had gone down a quieter street.  I believe most were either curious or befuddled but crowds, especially tourists, can sometimes get rowdy and uncouth, as I was to experience later that week.  Individuals and smaller groups are more likely to be friendly and inquisitive. 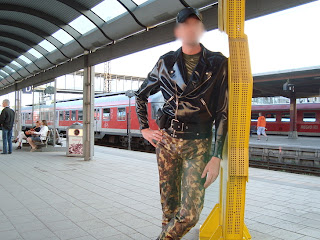 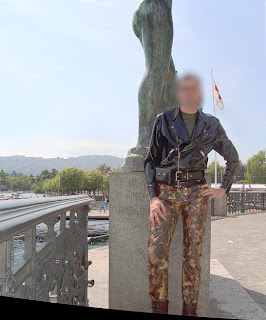 A few days later my work was done so I headed north to Skandinavia. Kopenhavn and especially Stockholm are both sculpture centers and feature a lot of public sculpture scattered around city center. The predominance of nude male sculptures in both cities is remarkable, especially given that winters are cold enough to freeze a man's balls off. Several of these are hot and a few even intense in their style!  Someday I will elaborate on this.

I arrived in Kobenhavn in full rubber, black tight skin-pants with yellow strip and the old black rubber cycle jacket. The pants are exceptionally comfortable and I could have worn them all week. It was a delight to wander the city and its parks in full rubber looking like a walking sculpture. Again I felt a little out of place strolling down the central boulevard, full of tourists, me in full rubber, but otherwise I encountered no issues in the streets and parks of the city.

There were two exceptions. At the end of the day there I had to pass close by a group of tourists at the train station, several of whom started laughing out loud as I went by. I flashed them the finger as I went off but am not sure they saw. At least it was the ugliest moment of the entire trip.  Later as I munched a snack waiting for departure I notice two young "ladies" passing by aiming their cell phone at me.  I shot a glance and they went off, only to reappear minutes later trying it again.  So I made it known I was aware of what they were trying to do and they disappeared.  Then they came around a third time. Same result. They could have asked permission but insisted on trying to get a stealth photo. It all makes an interesting statement I think on the new culture that is evolving. I was but half way on this leg of the adventure . . . 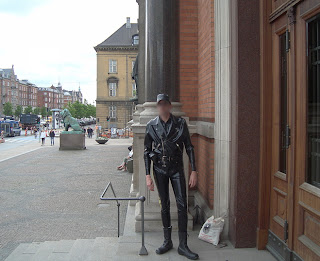 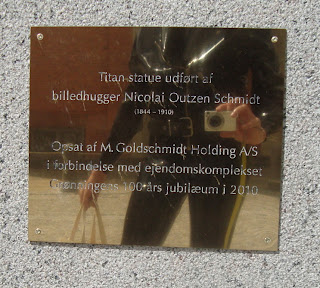 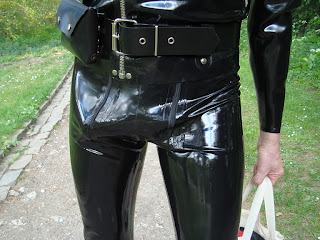